Before the invention of weed eaters in 1972, families that had lawns and gardens around their homes, as well as gardeners, were using various tools. From hand-held clippers and manual lawn mowers to cutlasses, people found different solutions for triming the grass in their gardens. But in 1972, George Ballas made a wonderful discovery that eased the task not just for the people of his generation but for future generations.

George Ballas invented the concept of using rapidly spinning string to trim away at thin organic materials like weeds, grass and thin shrubs. People around the world are now using weed eaters for personal and professional use.

Weed eaters are sometimes known as weed whips, string trimmers, or weed whackers. These machines trim grasses and weeds with amazing performance and efficiency. Even though they do not have blades, they are capable of cutting grasses with string that spins at a high speed.

The Invention of the Weed Eater

As mentioned above, the weed eater was invented in 1972 by George Ballas of Houston, Texas. To the surprise of many people, he worked as a property developer, university lecturer, author and businessman and not an engineer or any other highly technical occupation. He was also the owner of a dance studio and a dancer who underwent military training and participated in a war.

Like many others during that time, George did not like trimming with hand-held clippers. He got the idea for his first weed eater when he was watching car washers cleaning cars with the needle-like bristles of the brushes. He was surprised that his car could be washed with these brushes and nothing happened to its finishing. He thought of using the idea in creating something that would be able to cut and trim grasses to reduce the pain of pushing the lawn mower.

He constructed the first weed trimmer with a tin popcorn can, a rotary from his lawn edger and some nylon fishing line. He created holes in the tin can and through the holes then ran the fishing line through those holes.

Ballas took his invention further by collaborating with mechanical engineers to construct the weed whacker brand string trimmer. Today, the invention has spread widely and turned into many different models of weed whackers. There are now gas powered weed eaters and corded or battery powered electric weed eaters.

As it turns out, many others had a desire to make trimming an easier job. This invention has made George Ballas a rich man. It was advertised on television and many consumers came to know about it. They started buying Ballas’ product, which was then sold by his company. About $80 million sales were made by 1977. However, George Ballas, who was dubbed Weed King, later sold his weed eater company in 1979 to Emerson. The company was then acquired by Poulan, who was purchased by Electrolux in 1986. 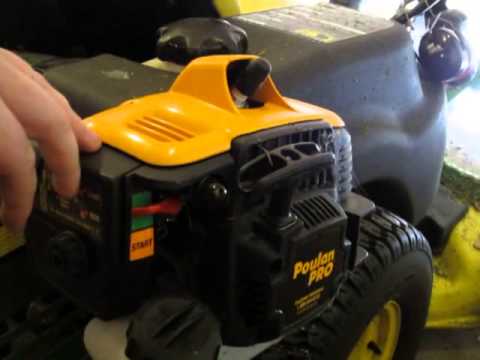 George Ballas’s idea continues even today. No new invention has eclipsed it even though manifold innovations have been introduced by many brands.

Avoiding Injuries and Damage When Using a Weed Eater
How to Use Edger, Blower and Brush Blade Attachments